You are here:
Anti-Aging 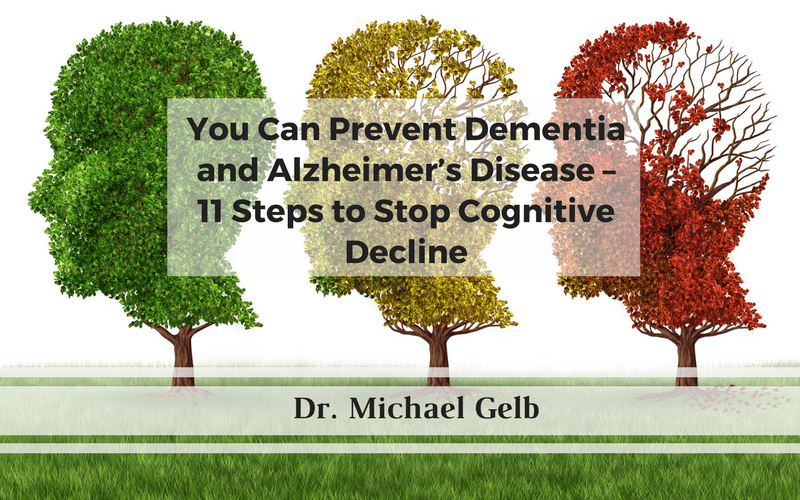 Alzheimer’s disease and Dementia is an epidemic in the United States. Now the third cause of death, Alzheimer’s affects an estimated 5.5 million Americans.[1]

We fear Alzheimer’s more than many other disease because before the person affected dies from this devastating condition, they are first left a shell. Alzheimer’s robs people of their humanity – the essence of what makes life worth living. And anyone who’s witnessed the downward cognitive spiral of Alzheimer’s often has horrifying stories leaving them terrified of the same fate.

Medications targeting cognitive decline have been wildly unsuccessful and have cost billions of dollars. However, using a functional medicine approach, researchers are finding dementia and Alzheimer’s to be preventable and even reversible.

At the forefront of this functional medicine approach to preventing dementia is Dr. Dale Bredesen.[2] Through breaking down the different elements that cause dementia, Dr. Bredesen and his team have identified 36 factors that determine if the brain will begin destroying its synapses.[4]

Because there are 36 factors, or as Dr. Bredesen calls it, “36 holes in the roof,” it appears a monotherapy won’t work.[5] What this means is preventing dementia is going to entail lifestyle changes – not popping one single pill.

The programs that have been developed to prevent dementia include therapeutic diets, lifestyle changes, and targeted therapies. Through implementing a protocol rather than prescribing a drug, Dr. Bredesen’s patients have successfully prevented, stopped, and reversed cognitive decline. Many of his patients have been able to resume tasks which were once near impossible, and return to work and other life activities.

Interestingly, many of these dementia preventing factors are components we already know contribute to a healthy life – now we are learning just how significant each of these can be.

Sleep’s serious impact on your brain

Sleep is one of the most important factors in the battle against cognitive decline. When you sleep your glymphatic system flushes build up between your nerve cells. Your brain shrinks by about 60 percent when you sleep, which allows for cerebrospinal fluids to flush toxins, cellular debris, and Alzheimer’s causing amyloids.[3],[4] Disrupted breathing during sleep interrupts this process and can cause brain damage and impaired glucose use (your brain’s primary energy source).[3]

With almost a quarter of the U.S. population carrying the ApoE4 gene, it’s important for everyone to be aware of what can be done to prevent cognitive decline.[6]

I want everyone to have the information and tools necessary to prevent cognitive decline. Here are 11 easy steps you can begin to implement today.

1. Check for sleep-disordered breathing – Sleep apnea is a significant contributor to cognitive decline. In fact, it’s estimated that up to 85 percent of people with sleep apnea will never receive a diagnosis.[4]

Even if you don’t think you snore, consider being checked for sleep apnea, hypopnea or upper airway resistance syndrome. Check your tongue for scalloping along the rim, which is caused by your tongue pushing up against your teeth. Scalloping is an indicator of sleep-disordered breathing.[7]

2. Get 7-8 hours of high-quality sleep every night – Notice sleep was included in 2 of these 11 steps? That’s because it is vital to get high-quality sleep. You not only need enough sleep, you need quality sleep. That means turn those screens off an hour before bed and implement other relaxing bedtime routine techniques.

3. Reduce toxin exposure – We are exposed to toxins at an unprecedented rate. New chemicals are being introduced constantly, so it’s important to be vigilant when considering the different sources of toxins.

4. Good oral hygiene – Another significant contributor to Alzheimer’s is infection and toxins. Oral bacteria such as P. gingivalis have been found in the brains of Alzheimer’s patients. Tests for oral bacteria DNA are simple and can identify the four high-risk pathogens and five moderate-risk pathogens – ask your dentist about these tests.

Your mouth is the gateway to your gut and brain health and overall health. Furthermore, a clean mouth prevents infections and maintains your immune system health. Frequent hygiene visits and Perio Protect hydrogen peroxide gel and trays can eliminate the highly pathogenic anaerobic gram negative bacteria.

However, “clean” does not mean ridding yourself of all bacteria with conventional and harmful mouthwashes – avoid these. Instead, opt for alcohol free mouthwash, a non-fluoride toothpaste, and probiotics.

5. Heal the gut – One of the first things you should do is heal your gut (if it needs to be healed). If you suffer from a leaky gut like so many Americans do, your diet and supplements cannot do its job properly due to malabsorption.

6. Implement a Ketoflex diet and overnight fasting – Ketoflex is a term referring to a diet that puts your body in ketosis, which is a state where the liver produces ketone bodies from fat. When you put your body in ketosis it encourages a cell recycling system called autophagy, which is great for taking out your “cellular trash,” so to speak.

Overnight fasting encourages the same processes and is relatively easy to achieve. Try not to eat after 8pm and wait until 12 hours later before you eat breakfast. People with the ApoE4 gene should aim for 16 hours of fasting.

7. Exercise – Try to exercise for 30 minutes to an hour, five to six times a week. You should incorporate both aerobic and strength training.

Additionally, maintaining an open airway is fundamental to reducing inflammation – be sure to have this checked by your dentist. Fortunately, nearly everything on this list helps to reduce inflammation.

I think adding brain training puzzles to your day is a good idea and many people find it rewarding. Brain HQ is a great program that allows you to schedule weekly puzzles.

This is only the beginning! As more people begin to learn about the different factors contributing to cognitive decline and take matters into their own hands (with the help of their functional medicine doctors), hopefully we will hear additional promising stories and learn even more about brain function and preventing decline.

For the first time in decades the future of Alzheimer’s treatment has hope! Share this article with a friend or family member who would welcome such great news.

Reduce Wrinkles, Brighten Skin, and Get Your Energy Back – The Juvabite Solution
April 18, 2018

Why You Aren’t Getting the Right Kind of Sleep
April 8, 2018

Dentists Are the First Line of Defense in Fighting Sleep Disorders
November 21, 2017