Bite Changes through the Years 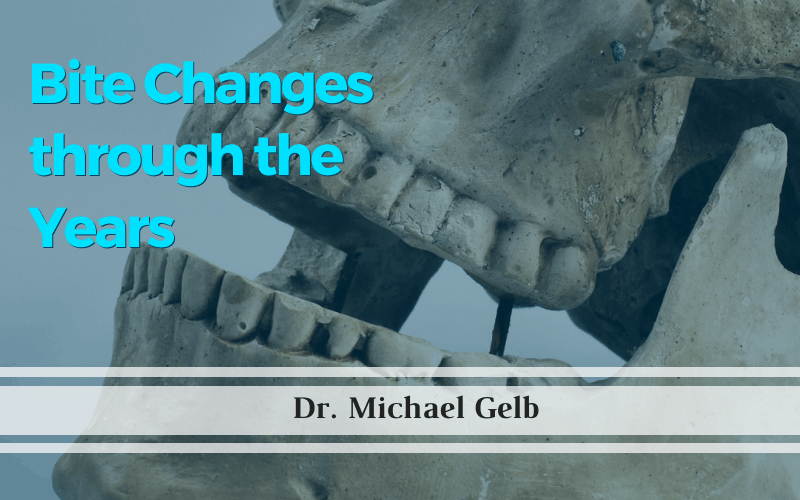 Mandibular repositioning initially focused on ear symptoms as described by Costen an ENT as part of the treatment of Costens Syndrome. The vehicle of repositioning was partial dentures at that time . 40 years later Farrar and McCartey discovered the ideal position of the disc in the temporomandibular joint as well as the pathophysiology and an anteriorly displaced disc . The Farrar appliance maintained the disc in its ideal position at night through the use of an antiretrusion ramp. Gelb in New York at the same time through the use of a mandibular orthopedic repositioning appliance [Mora] or Gelb appliance placed the jaw in a 4/7 condylar position against the anterior wall of the glenoid fossa or the posterior slope of the articular eminence. Many bites were finished in this position or other CR positions as described by Dawson and Celenza.

I began to use the Silencer device invented by Wayne Halstrom in 1990 with the bite determined by the Gothic Arch Tracer. Jaws were repositioned 66 2/3 % of the distance between maximum retrusion and protrusion to start with some lateral freedom.
Bite changes were noted 3-5 years later.

Technology also advanced over the years in the form of Home Sleep Tests HST and CBCT Cone Beam CT. We could now visualize the airway with the patient awake and upright and measure physiologic variables such as apnea, hypopnea, Reras
and oxygen desaturation during sleep.

In the 70s and 80s bite changes were expected and corrected with orthodontics and restorative dentistry when necessary.
In patients with 4 bicuspid extractions and retractive headgear posterior open bite were more common as the jaw settled anteriorly with only the front teeth contacting.

About a year ago after teaching with Terry Bennet and Mayoor Patel I realized the importance of using an AM Aligners and Blue Bite tabs. Before this, opening the airway trumped everything and bite changes were often seen as a positive side effect.

Within a one week period I had two patients who were unable to touch their posterior teeth after wearing a sleep device for one night. This was devastating for both patient and doctor. I realized then that it might be possible to maintain an open airway at night without unintended bite changes in the morning. The AM aligner and blue bite tabs have allowed this to happen.

Don’t get me wrong, certain patients with retruded, painful, clicking jaws prefer to be in a more physiologic position during the day with anterior guidance. After the cognitive behavioral technique of lips together, teeth apart with the tongue on the spot many patients can mindfully remain in a relaxed position with their teeth only contacting during a swallow.

2018 was a Harvey Weinstein moment in dentistry. Howie Hindin and I declared it was no longer acceptable to close the airway, by retractive dentistry, headgear, 4 bicuspid extractions or nightguards. Now back to bite changes. For years, I felt that by retruding the jaw in the morning to avoid bite changes I was closing the airway. It has become apparent that the momentary contact of the teeth during chewing and swallowing during the day does not adversely affect the airway with lasting morbidity.

On the other hand those patients with unwanted and unexpected bite changes had greater morbidity related to inability to chew or localized discomfort.

Even though informed consent warns the patient against the chance of bite changes during and after the wearing of mandibular advancement devices, it’s onset can be so gradual that it is missed by the patient and general dentist.

It is my hope that greater awareness of sleep disorders and narrowed airways will lead to more patients being tested and diagnosed with Airway Centered Disorders and Sleep Disordered Breathing. Our medical colleagues and the public should understand that oral devices work and that bite changes can be prevented. In fact Mean Disease Alleviation is improved with oral devices vs CPAP due to greater compliance with the dental device.

In light of these findings, we are offering all of our patients free morning aligners.