You are here:
Research 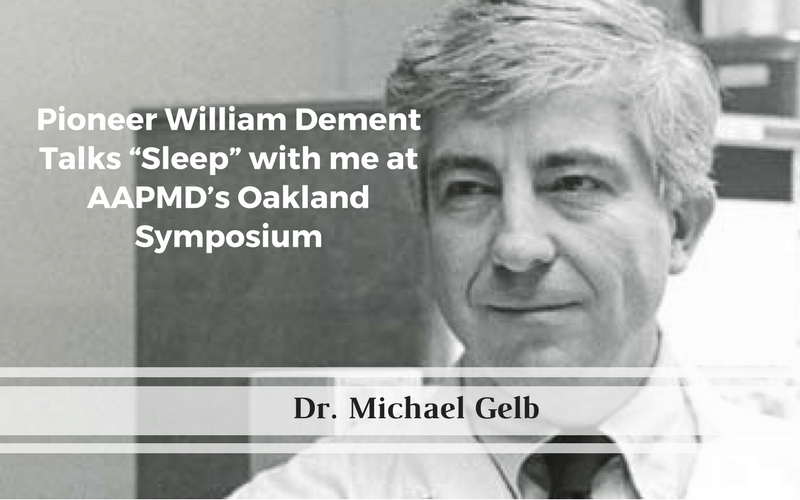 William Dement is an American sleep disorder pioneer and founder of Stanford’s Sleep Research Center, the world’s first sleep laboratory, sometimes referred to as the father of sleep medicine. He appeared at AAPMD’s symposium on airway issues in Oakland. Listen to my interview with William Dement.

William Charles Dement (born July 29, 1928) is a pioneering US sleep researcher and founder of the Sleep Research Center at Stanford University. He is a leading authority on sleep, sleep deprivation and the diagnosis and treatment of sleep disorders such as sleep apnea and narcolepsy. For this pioneering work in a previously uncharted field in the United States, he is sometimes referred to as the American father of sleep medicine.

Dement was born in Wenatchee, Washington in 1928. In the 1950s, of those who also studied at the University of Chicago, he was the first to intensively study the connection between rapid eye movement and dreaming. His fellow student Eugene Aserinsky had mentioned to him that “Dr. Kleitman and I think these eye movements might be related to dreaming”.[3] Aserinsky, along with his and Dement’s adviser Nathaniel Kleitman, had previously noticed the connection but hadn’t considered it very interesting. Dement had an interest in psychiatry, which in those days considered dreams to be important, so he was excited by the discovery and was eager to pursue it. He began his work in sleep deprivation at Mount Sinai Hospital in the late 1950s – the early 1960s. He was among the first researchers to study sleeping subjects with the electroencephalogram (EEG), and he wrote: “I believe that the study of sleep became a true scientific field in 1953, when I finally was able to make all-night, continuous recordings of brain and eye activity during sleep.” Studying these recordings, he discovered and named the five stages of sleep. In collaboration with Dr. Christian Guilleminault, Dement proposed the measure that is still used for the clinical definition of sleep apnea and the rating of its severity, the Apnea-Hypopnea Index (AHI).

How Your Dentist Can Ease Your Morning Headaches
November 7, 2018

How Poor Gut Health and Trouble Sleeping Are Connected
October 25, 2018

Conquer Your Brain Fog by Cleaning Out Your Brain
September 25, 2018