The Lack of a Snout – An Evolutionary Story

You are here:
For PractitionersResearchTMJ 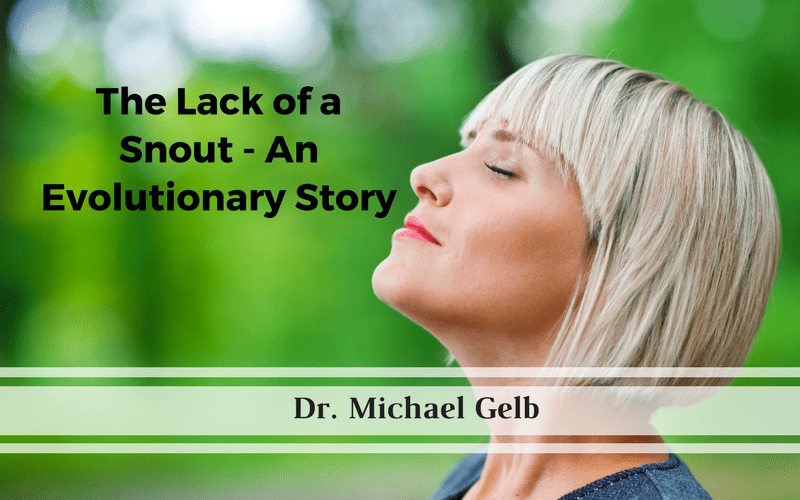 The human head differs from other mammals including the great apes in many ways but two of the most important are the size of our brain and the lack of a snout. Our skulls are well designed as seen in shared walls between the roof of the palate and the floor of the nose and shared use of space such as the pharynx, which is a major passageway for air, food, liquid, sound and mucous. Humans grow shorter upper jaws and consequently need to grow shorter lower jaws with shorter ramus and corpus.

Some authors believe that after the discovery of fire around 125,000 years ago and growing grains led to a softer diet with resultant narrowing and shortening of the maxillary and mandibular arches up to 21%. (Carlson 1976) It is, however, more widely agreed that malocclusions increased in postindustrial populations with less facial growth and diminished arch size. A meta analysis of 62 studies has shown that wisdom tooth impaction has grown from 2.3% in preindustrial populations to 24.2% in post industrial humans. Because the human head is shallow, vertical and snoutless with small teeth and a tongue that extends well down into the neck we are susceptible to a narrowed airway.

At birth the infant is an obligate nasal breather which facilitates breastfeeding. Human neonates have the typical non human primate configuration with a high epiglottis locked in with the soft palate. This configuration enables newborns to breathe while suckling. In early infancy the epiglottis descends along with the root of the tongue as the vertical dimension of the nasopharynx more than doubles by the end of puberty. Unfortunately, this leaves the young adult susceptible for airway collapse as well as increased nasal resistance.

Trouble in paradise continues into adulthood. Humans prefer to breathe through the nose as the air is warmed, filtered and humidified better than when mouth breathing. Unfortunately, humans have 1/10 the expected nasal area for a mammal our size. The small surface area of nasal respiratory epithelium is due primarily to the lack of a snout and a short neck as well as a short face.

Children with enlarged adenoids and tonsils become obligate mouth breathers and develop long face syndrome. Due to increased nasal resistance there is diminished growth of the nasomaxillary complex which includes the nasal cavities and the maxilla. This is expressed as a high narrow palate and slack jawed open mouth posture. You can easily spot these individuals by their flat faces.

These effects can be reversed with the restoration of nasal breathing through adenotonsilectomy, palatal expansion and myofunctional therapy if done early enough in childhood.

Most adults who present to my practice have the typical homosapien small retracted face. Unfortunately, almost 50 % have had some form of orthodontics which has made the situation worse. Orthodontic philosophy has embodied and embraced bicuspid extraction over the last 200 years. Unfortunately approximately 35% of the specialty is still holding onto this concept which can retract the dental arches and close the airway. Maxillary head gear is in the same category. McNamara found that 95% of maxillary arches are retruded. Evolution combined with epigenetics has produced a small retracted mid-face. This results in narrowed maxillas and mandibles with narrowed airways and narrowed noses. Every orthodontist must consider the position, width and height of the maxilla as it relates to the nasal cavity, soft palate and airway. Closing the airway is not an option and cannot be condoned.

Epigenetics is the phenotypic expression of the genes. In the last one hundred years and more so after World War 2 children were exposed to pesticides, pollution and preservatives in food shampoo and cleaning products. Animals were fed antibiotics and unhealthy grains. Estrogen disruptors were prevalent. All of these epigenetic factors led to narrow dental arches, crowded teeth and malocclusion similar to what was seen in rats.

As a result of the retracted narrow face of the human today, over 50% of the population has airway pathology. A recent article by Smith and Gozal found 27% of children to be habitual snorers.

About 60% of adults with airway centered disorders can be treated with oral appliance therapy which advances the mandible and tongue during sleep. Many of our patients benefit from opening the nasal airway during sleep. Nasal surgery targeted on the septum and turbinates is one option. Another option is the Mute nasal respiratory device which fits inside the nose. This is a non surgical inexpensive option which has been efficacious for many of our patients.

In summary, due to our enlarged brain and upright bipedal posture we have small retracted faces with no snout. Our noses have shrunk in size as well as our sinuses. This explains the high preponderance of nasal congestion, sinus congestion, ear fullness and nasal and sinus complaints. An easy low cost treatment modality (Mute)which opens the nasal airway is an adjunct to traditional nasal sprays and nasal surgery.

A recent article in Elle May 2017 “An Awakening Nightmare” by my patient Rachel Combe brings to light the debilitating symptoms of Upper Airway Resistance Syndrome largely due to a large tongue, small mouth and narrow nasal airway.

The repeated sensitization of the olfactory nerve triggers a stress response from the limbic system and with it an increase of all the Functional Somatic Syndromes. Avram Gold attributes this to activation of the HPA or hypothalamic pituitary adrenal system.

It’s never too late to open your airway. Its take a team.

What’s the True Cause of Your Irritating Jaw Pain?
January 10, 2020

A Surprising Clue About Alzheimer’s Disease – Found in Your Mouth!
May 21, 2019