Why Our Ancestors Never Needed to Worry About Breathing, But We Do 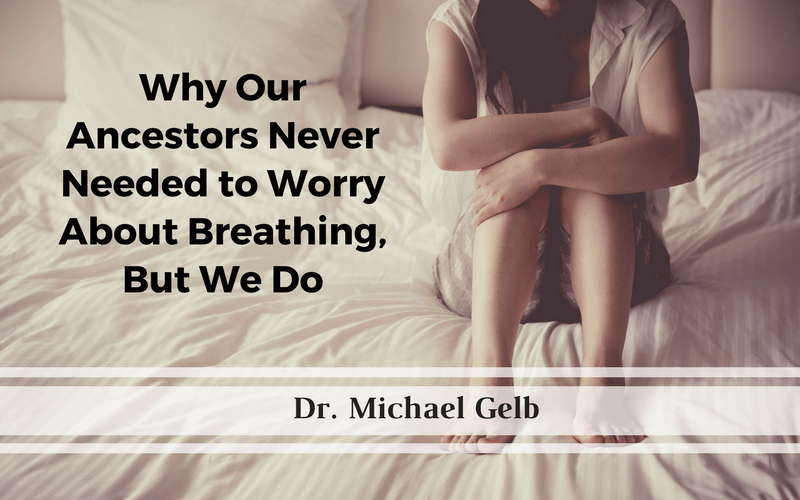 Most of us take breathing for granted. Everyday we go about our business and breathing happens automatically and effortlessly. Only when this processes is interrupted by a cold or infection, do we suddenly have a new appreciation for the ability to breath freely. Although, the interesting thing is we actually breath a lot less freely than our ancestors did.

Numerous evolutionary shifts have taken place that prevent us from breathing properly. You may not even notice you don’t breath well through your nose because from an early age you started breathing through your mouth to compensate for these evolutionary changes.

Additionally, there are now common life factors that contribute to our difficulty breathing. Factors such as softer food, less breastfeeding, and crooked teeth that were improperly corrected by your orthodontist or dentist.

There are numerous factors that can come together in a perfect storm to cause the silent epidemic of disordered breathing. This is a pervasive issue and we are only at the cusp of fully realizing just what a problem this has become for our health. Disordered breathing has been associated with systemic inflammation, dementia, Alzheimer’s, heart disease, and more.

How did we get here? Why do we need to focus on opening our airways and ensuring we are breathing through the nose? The story begins with the the development of our big brains, lack of snouts, and small airways.

Say Goodbye to the Snout

Your head differs from other mammals in many ways. The two most impacting factors are your large brain and your lack of snout. The brain human brain is five times larger than what would be predicted for our body type and so the space had to be well designed. There are shared walls of the roof of the mouth with the floor of the nose. The pharynx is a major passageway for air, food, liquid, sound, and mucous.

As we stood upright our snouts extracted into our faces and became the small noses we think of today. The shrinking of our noses also shrank our sinuses. Smaller sinuses are the reason behind much of our nasal and sinus congestion, infection, and many ear, nose, and sinus complaints.

Some researchers believe that the invention of fire and growing grains led to a softer diet, which resulted in a weaker jaw. This weakened jaw lead to the narrowing and shortening of the upper and lower jaw by up to 21 percent. Another, more widely accepted theory is that malocclusions (misaligned teeth) contributed to the diminished arch of the palette and a weaker profile in post industrial populations.

A meta analysis of 62 studies found that wisdom tooth impaction –  or when these teeth don’t fully erupt – has increased in prevalence from 2.3 percent in pre-industrial populations to 24.2 percent in post-industrial populations. This means our mouths have changed dramatically in less than 200 years. Our heads are now shallow, vertically oriented, snoutless, with small teeth and a tongue that extends well into the neck – all of this contributes to a small and narrow airway.

How Your Airway Narrows as You Age

Not only do we have evolutionary changes occurring in the background, there are also changes that occur on an individual level.

You were born a natural nose breather. You needed to be a nose breather so you could breastfeed and breath at the same time. There’s a flap of elastic cartilage in the back of your throat called the epiglottis, which allows the phenomenons of breathing and eating to coexist. Your epiglottis stands open during breathing and closes during swallowing. As you get older the epiglottis descends along the tongue, and at the same time your nasopharynx gets larger – this space doubles by the end of puberty. This shift leaves you susceptible to airway collapse and nasal resistance as a young adult.

But that’s not all…

There are numerous factors that could have caused you to switch from nasal breathing to mouth breathing throughout your life. Your body prefers you continue to breathe through your nose because the air is warmed, filtered for pathogens, and humidified. However, humans have one tenth the expected nasal area for a mammal of our size. This is compounded by the fact that we have no snout and a short neck.

On top of these issues, almost half of the patients that come into my office have had some form of orthodontics that made their situation worse. Bicuspid extraction, maxillary headgear, and traditional mouthguards can all close the airway. We can no longer ignore the importance of an open airway – dentistry is changing as we know it.

That is a lot of factors stacked against us. It is innately hard to breathe for us – no wonder so many struggle with mouth and sleep disordered breathing!

If you ever had enlarged adenoids or tonsils as a kid, this can contribute to long face syndrome and mouth breathing, which makes the airway even more diminished. With children, corrective action can reverse and restore nasal breathing through adenotonsillectomy, palatal expansion, and myofunctional therapy if done early enough in childhood.

For about 60% of adults, airway disorders can be treated with oral appliance therapy, which advances the mandible and tongue during sleep. Many of our patients benefit from opening the nasal airway during sleep. Another option is surgery targeted on the septum and turbinates. Still another option is the Mute nasal respiratory device, which fits inside the nose during sleep.  This is a nonsurgical, inexpensive option, which has been effective in many of our patients.

Based on the evolutionary changes that have occurred in the past few hundred years alone, there’s a good chance you’re not breathing properly. For some, minor changes help but for others opening the airway can cause life changing benefits. Here are a couple of questions you should ask yourself – Each yes, indicates you are at higher risk for disordered breathing and associated risks:

This is by no means a definitive list, however, if you answer yes to any of these questions, you should make an appointment with an airway doctor. It’s never too late to open your airway.

If you need a New York City airway doctor, you can request an appointment here or call 212-752-1662. If you are elsewhere in the country, you can find a doctor here – www.Airwayhealth.org.

Look into this today, the changes are often dramatic. Open your airway, open your world.

What’s the True Cause of Your Irritating Jaw Pain?
January 10, 2020