How Do You Prevent Heart Disease? A Clean Mouth & An Open Airway 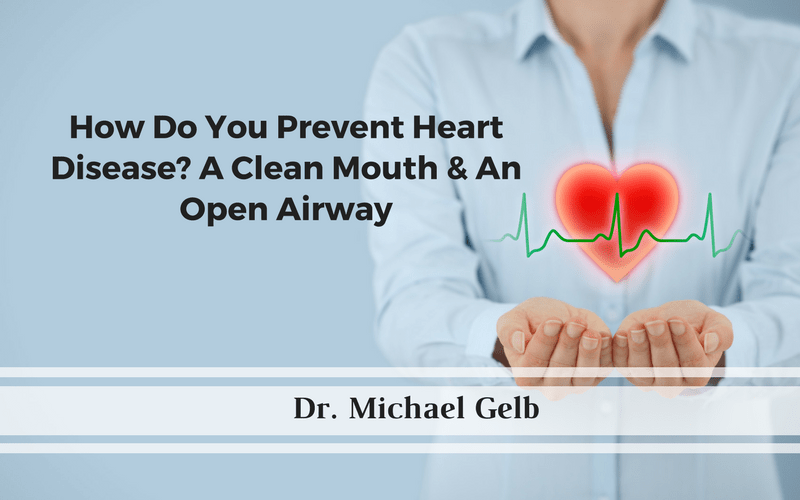 If you’re wondering, “How in the world can a clean mouth and an open airway prevent heart disease?” it’s time you hear this vital information about the mouth and heart disease connection. Unfortunately, the myth that fat clogs your arteries to cause a heart attack is an easy picture to paint and therefore has stuck around, even with mountains of evidence indicating otherwise. We now know that certain other factors cause inflammation, which contribute to heart attacks. And your mouth is the beginning of this process.

The mainstream has been seriously misleading in the fight against heart disease. It doesn’t help that the sugar industry manipulated science for over 60 years, paying to point the blame at fat. This hid the fact that sweets cause heart disease through elevated bad cholesterol and triglycerides. We also know that sugar manipulates your oral and gut microbiome in a manner that contributes to heart disease causing inflammation.

While these may seem like completely new and conflicting information, it actually leans on what we’ve known for decades – the only difference is which information gets the spotlight in mainstream media.

Fortunately, the truth behind heart disease is becoming more widespread, but it’s not nearly common knowledge yet. Until the fact that a healthy oral microbiome and an open airway are widely known as two key elements needed to avoid heart attacks, I’ll continue spreading this much-needed information.

These root causes, which increase inflammation throughout the body, can be corrected with the help of your dentist. In this article, we are going to dig deeper into the two elements that contribute to heart health via the mouth.

Gum disease is caused when the bad bacteria in your mouth overtake the good bacteria. These bad bacteria enter the bloodstream when you brush your teeth, floss or have dental work done.

When you’re constantly releasing these bad bacteria into your bloodstream, it causes low level immune system responses. Your immune system sees this bacteria as a threat and begins fighting it, with inflammatory cytokines. An elevation of these inflammatory markers leads to acute and chronic inflammation in the body. Specifically, your arteries, where it’s been observed to cause a prothrombotic environment – a state ideal for a heart attack.

What’s more, the bacteria that cause gum disease are also often found in the artery tissues of patients with heart disease.

Nearly all of these artery samples had the same two bacteria present:

Bradley Bale and Dr. Amy Doneen and others have also identified :

This means your dentist can test you for high risk pathogens and help you develop a treatment plan to reduce the impact of these problematic bacteria. This is huge news in the fight against the number one killer in America.

How a small airway contributes to heart disease

The other factor that contributes to heart disease is small airways. Our airways are much smaller than our ancestors’. Our jaws no longer develop fully, down and out, and as a result, they are more narrow, our profiles are less developed, and our faces aren’t as symmetrical (think deviated septum).

How is it possible our airways are smaller?

It’s due to a number of changes that have occurred in the last few decades, including:

All of the factors contribute to smaller airway development. The problem with smaller airways is that they negatively impact our sleep. The tongue and mouth completely relax during the deeper stages of sleep, and when there isn’t enough space this causes collapse of the airway with decreased oxygen levels and disturbed sleep. Your brain will pull you out of sleep if you aren’t breathing well due to lowered oxygen levels and increased CO2. Even snoring and resisted breathing or UARS can lead to increases in cardiovascular disease.

Most people are unaware this is happening and will go their whole life without a diagnosis.

When you don’t get into the deep stages of sleep, important healing and recovery processes that need to happen can’t occur. Sleep-disordered breathing due to small airways has been associated with higher heart attack risk and mortality.

Oral bacteria overgrowth (eventually gingivitis and gum disease) and small airways are a major contributor to heart health. In fact, I believe the dental community should play a larger role in the fight against morbidity and mortality by teaching their patients about these high risk heart disease bacteria and the importance of an open airway. If dentists teach patients about these important oral systemic connections from an earlier point in life, perhaps we can lower the rate of heart disease.

If you have been told you’re at risk for developing or have developed heart disease, I urge you to have your oral/systemic health checked. Consider both oral pathogens and your airway when you make your next appointment with your dentist. You should also consider making an appointment with a dentist who specializes in airway health. Fighting oral/systemic disease and improving your airway health are two relatively simple ways you can bring your risk for a heart attack down.

A Surprising Clue About Alzheimer’s Disease – Found in Your Mouth!
May 21, 2019