The Secret Condition That Is Waking You Up at Night 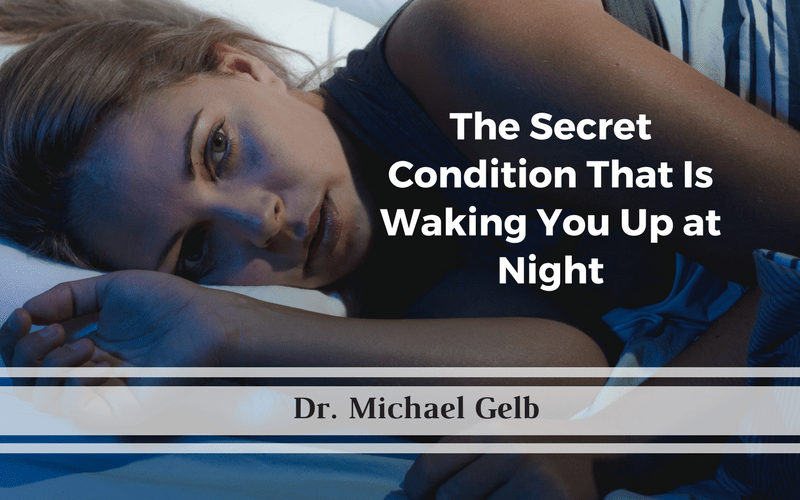 Interrupted sleep is so common that most of us don’t stop and second guess why we wake up at night. However, just because something is incredibly common doesn’t make it normal or healthy, making this a question worth a second look.

So stop and ask yourself…

Why do you wake up at night? And what’s waking you up in the first place?

If you’ve ever struggled with insomnia, often the answers look something like this:

What’s actually waking you up is… your breathing. Or rather lack thereof.

Sleep medicine has only been recognized as a specialty of medicine in recent years. This means not only do we have much more to learn about the importance of sleep on our health, but some of the most basic information we accept as facts when it comes to sleep, should be questioned.

The Not So Silent Epidemic – Sleep-Disordered Breathing

Statistically, there’s a good chance you have sleep-disordered breathing. You probably have a serious sleep disorder if you:

The Astronomical Cost of Poor Sleep

In addition to declining physical and mental well being, the sleep-disordered breathing epidemic is costing us financially as well. In 2011 alone, 40 million prescriptions for sleeping pills were written, making up $2.8 billion in sales.

As a country, we spend billions of dollars looking for solutions for sleepless nights in the form of over the counter drugs, supplements, vitamins, minerals, supplements, and prescriptions drugs. Furthermore, billions of dollars more are wasted in lost productivity and workplace accidents. The U.S. economy is estimated to lose $411 billion annually due to insufficient sleep.

We know we need to get better sleep, so why aren’t we looking for better solutions?

Why Don’t People Get Help for Sleep-Disordered Breathing?

If this is such a serious problem, why aren’t people getting more help to correct sleep-disordered breathing?

Well, there are a few reasons for this. First, sometimes people are completely unaware that they have interrupted sleep. For example, they might think they are just getting up to go to the bathroom frequently. But even when awareness is brought to the fact that there might be something different about their sleep, people are still reluctant to get help.

The thing about sleep-disordered breathing is it’s so common and widespread people often write it off as not a big deal. Usually, it isn’t until they have a partner who hears them stop breathing, choking, tossing, turning or snoring throughout the night encourages them and in some cases demands, they seek help.

But perhaps the most common reason some people don’t get help for their sleep-disordered breathing it’s because it’s a low level chronic condition that can go ignored for years, even decades without attention.

The Different Levels of Sleep-Disordered Breathing

You don’t need to have full blown sleep apnea to have sleep-disordered breathing.

Even a small level of flow limitation can cause your sleep to be interrupted. When you have a low level sleep-disordered breathing condition, it can take years for the consequences to snowball into an event significant enough to send you to the doctor.

Dr. Barry Krakow’s TED Talk, Why Do You Wake Up At Night? He talks about how even people with sleep apnea, who suffer from hundreds of mini suffocations throughout the night, usually don’t seek help for years, even decades. Sometimes they only seek help after a partner has asked them to or because they’ve suffered serious consequences, such as heart disease or cognitive decline.

So, it’s easy to see why somebody who’s only suffering a 3-4%  reduction in oxygen flow might not realize that they have a serious sleep-disordered breathing problem. Furthermore, it’s going to take them a lot longer before anything gets bad enough that they actually want help.

This is incredibly unfortunate because there’s a lot that can be done to improve sleep, which provides increased energy, decreased disease risk, and an overall better quality of life.

Medication is Not The Answer to Better Sleep

First, there are nasal saline rinses and nose strips. Nasal sprays help eradicate chronic congestion and nasal strips help open the airway. The Mute device is another option that helps open the airway.

A growing segment of sleep practices are oral devices or appliance therapy. These are becoming the new standard for sleep-disordered breathing. These oral devices are gently placed over your teeth to prevent the jaw from dropping back during sleep . This opens the airway and permits more air flow during sleep eliminating the majority of sleep disordered  breathing events.

The ProSomnus®ACG Select Sleep and Snore Device was designed for women, who tend to have smaller mouths. This device has proven to be helpful in those who cannot tolerate other sleep and airway appliances.