The Surprising – and Overlooked – Contributors to Your Child’s Autism

You are here:
ChildrenSleep Disorders 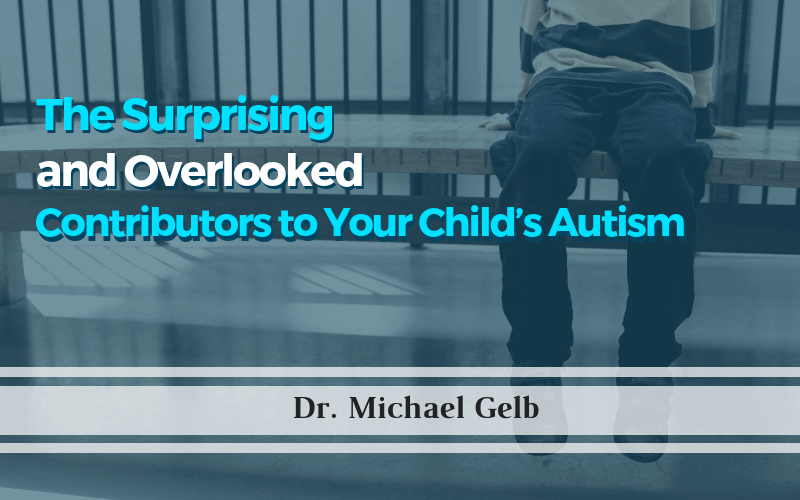 Every child is unique, and although you may have been stymied by western medicine before, you may be able to improve the day to day life for your autistic child. Autism doesn’t start and end in the brain, it’s a systemic disorder brought on by a wide variety of factors – some of which can be altered.

Your autistic child may be:

What would you say if I told you that these symptoms could be all connected? And there is a way to help alleviate them?

In 2014, the results of a review of several studies was published, and it turned out that a high number of children on the autism spectrum disorder struggle with gastrointestinal symptoms. GI symptoms are four times more prevalent in children with autism than in children without.

Has your child ever struggled with:

If so, your child’s symptoms can indicate a systemic way his or her digestion is affecting their mood or behavior. There’s a strong relation between GI symptoms and increased social withdrawal, irritability, hyperactivity, and stereotypy (repetition of a particular action).

Often a child with autism can have a specific, pretty restrictive diet owing to sensory issues, or a marked preference for either spicy, or very bland food. Food selectivity, as it is known, can have a huge effect on the amount of nutrients your child absorbs through the gut.

Processed food can be particularly comforting for autistic children, as it tastes the same every time, unlike home cooked food. Unfortunately, processed and prepackaged food can contain a lot of sugar and additives, which can contribute to stomach upset. Combined with a tendency in people with autism spectrum disorder to have an impaired gut microbiome, it’s not surprising complications with digestion can arise.

Examples of GI medical conditions associated with autism include:

Leaky gut, or increased intestinal permeability, is where your gut wall’s ability to only absorb nutrients and “the good stuff” is impaired. The gaps where nutrients pass through increase in size, allowing toxins and debris into the bloodstream.

Irritable Bowel Syndrome (IBS) is a collection of GI symptoms that can be caused by changes in the gut microbiome, inflammation in the gut (caused by certain foods like sugar), or poor communication between the gut and the brain. The gut and the brain have a special connection and there is the potential in the future to reduce autism symptoms through diet or probiotics – but more research needs to be done.

Constipation and diarrhea can occur due to rigid-compulsive behavior, but also can be classic symptoms of Irritable Bowel Syndrome.

Interestingly, in a recent study of co-occurring medical conditions in children in autism, a combination of constipation and sleep disorders was found in 6.2% of children under 5 on the autism spectrum – a higher percentage than expected by the researchers. But why are sleep problems such an issue in autistic children?

The rate of parent-reported incidence of sleep disturbance in autistic children ranges from 50 – 80%. This is an astounding figure! The high prevalence of sleep disorders is likely to increase the severity of behavioral symptoms of autism in children.

Does your child have trouble:

All of the above are common sleep patterns in autistic children. But what causes these sleep disruptions?

There are several possibilities:

There’s an overlap between the symptoms of autism and the symptoms of ADHD, and many children with autism may also have ADHD. ADHD contributes to the hard time your child has getting to sleep or staying asleep, but comes with it’s own sleep-related symptoms, such as restless leg syndrome, insomnia, and difficulty calming thoughts in order to sleep.

Also dealing with epilepsy can have a huge impact on an autistic child’s sleep, owing to sleep seizures waking them up. Seizures during sleep or even during the day can make your child’s sleep lighter for up to two days after the seizure.

Side effects from medication

Often individuals with autism are prescribed medication to help with related symptoms such as anxiety, depression, and trouble focusing. Children with autism are no exception to this, but many medications have the side effect of inhibiting sleep at night.

Thanks to a possible mix of genetics, low levels of melatonin, and sleep disorders, many children with autism struggle with an irregular circadian rhythm. This means their body clock doesn’t allow them to fall asleep at a regular time, and their sleep/wake cycle doesn’t respond to outside cues, like darkness at night, and sunrise.

Over stimulation during the day, combined with anxiety can contribute to several sleep problems, including bedtime resistance, sleep anxiety, sleep duration, sleep-onset delay, and night wakings. In particular, hypersensitivity to touch is a major factor in affecting sleep for children with autism.

So in many ways it’s not surprising that your autistic child might be having difficulty sleeping at night. Worse, it may be affecting his or her behavior as the accompanying brain fog is no joke – for you or your child!

But why are sleep problems and gastrointestinal symptoms found together in so many autistic children?

Sleep Problems and IBS Combined – What Does It Mean for Your Autistic Child?

I’ve written in full about how poor gut health and trouble sleeping are connected, but in short, it comes back to the gut-brain connection. Your child’s gut is able to communicate with their brain through the vagus nerve and hormones released by neurotransmitters in the gut.

The combination of sleep disorders, gut health, and autism work together to worsen your child’s autistic symptoms, and they can form a vicious cycle:

Such mechanisms of the body are brought to a crisis point if your autistic child is suffering with an undiagnosed airway sleep disorder. Trouble with the airway at night, causing a lack of oxygen, can provoke inflammation and oxidative stress in the brain, further release of cortisol into the bloodstream, and a worsening of autistic behaviors.

But these symptoms can be lessened through a change in diet, vitamin supplementation and careful consultation with an AirwayCentric® dentist to treat an underlying airway sleep disorder. You don’t have to go it alone.

If you’d like to learn more about our AirwayCentric® approach, pick up a copy of GASP!: Airway Health – The Hidden Path To Wellness by Dr. Michael Gelb and Dr. Howard Hindin. If your autistic child is struggling with insomnia or poor sleep in the New York area and you suspect disordered breathing is to blame, fill out our contact form, or call to make an appointment with Dr. Gelb on (212) 752-1662.

Sleep Disordered Breathing in Children: The Role of an Airway Centric Pediatric Dentist and Orthodontist
May 6, 2019