Hyperactive with Poor Grades? Your Child May Need Early Orthodontics

Does your child fidget and have endless energy all day, but then struggle to wake for school? Perhaps you feel they’re not hitting their developmental milestones, or achieving the grades they want? What’s going on?

Your child may need early orthodontics to fix their airway sleep disorder. Yes, that’s right – poor sleep can cause hyperactivity in kids! Your child’s brain is amazing, and it needs sleep to develop properly. While on the face of it your child seems to be getting their eight hours a night, undetected airway sleep disorders can have a severe impact on the emotional and physical wellbeing of your little one.

The American Association of Orthodontists (AAO) recommend that your child should be examined for the first time by an orthodontist before the age of seven. But this doesn’t mean that you have to wait to seek treatment until he or she turns six, or five, or even four! Improving your child’s airway sleep disorder is a crucial first step in improving their complete health and can start as early as the first year of life.

How Can I Tell If My Child Has Sleep Apnea?

While there is some overlap in symptoms between adult and child sufferers of airway sleep disorders, there are a few notable differences in the way the disease manifests in kids. 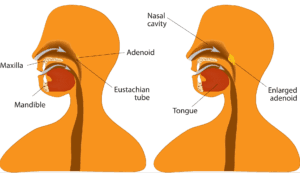 Tonsils and adenoids often block your child’s airway at night. This can cause a vicious circle, as the breath going directly into his or her throat (as opposed to going through the nose) can cause inflammation and often enlargement of the tonsils and adenoids.

When your child’s breathing is disrupted during their sleep, their brain perceives the pause as choking. So your child’s heart rate and blood pressure rises. The brain being on high alert means that sleep is interrupted, oxygen levels in the blood drop, and a stress response is triggered throughout the body. The release of the cortisol and adrenaline hormones provoke the fight or flight response. The process may repeat hundreds of times a night, turning bedtime into a time of crisis rather than a time of rest.

Contributors to your child’s airway sleep disorder can include:

The goal of early treatment is to achieve nasal breathing, with an open airway – allowing for deep restorative sleep.

Whatever the reason for your child’s airway sleep disorder, it is of the utmost importance that you seek treatment as soon as possible. Snoring, mouth breathing , sleep apnea, and other airway obstructions during sleep, can have a major effect on your child’s development. Airway sleep disorders don’t just result in having to deal with a sleepy kid – there can be dire consequences.

Untreated airway sleep disorders in children can have a serious effect on both their health and the developing brain. Children need a much higher percentage of deep sleep and REM sleep – meaning that a restful night is essential.

REM sleep is crucial for the development of a growing brain:

Deep sleep helps develop the prefrontal cortex which is the area of the brain responsible for:

So it stands to reason that disruption to these processes at night may have an adverse effect on your child’s development. Think about the times when you have felt deprived of sleep. How processing information at work becomes more difficult, as you can’t concentrate for long periods of time on a task; your ability to remain alert suffers, which can make driving dangerous; it’s harder to make decisions; your judgment is often impaired. Lack of sleep causes even more difficulties for children, as their brains are still developing.

Sleep disordered breathing in children can affect the prefrontal cortex, which can affect your child’s speech and language development, and their IQ. Researchers found that sleep apnea may reduce a child’s IQ by as much as 10 points.  As the occurrence of sleep apnea and snoring affects your child’s brain, it can have a direct influence on your child’s day-to-day behavior. Sleep apnea and behavioral problems often go hand in hand.

An airway sleep disorder can cause similar symptoms to ADHD, so if your child has already been diagnosed with this condition, I urge you to get the following aspects of his or her health checked:

If your child has already been diagnosed with ADHD at the age of 2 of 3, it is of the utmost importance that you get their airway tested as many commonly prescribed ADHD medications are not suitable for children under the age of 4. Ultimately, improving your child’s airway may be the deciding factor in helping your child thrive and succeed.

The Benefits of Early Orthodontic Treatment

Do not wait and see if the problem of disordered sleep breathing goes away by itself – your child’s future lies in your hands. Instead, there are actions you can take to improve his or her wellbeing.

I advise the following steps:

If you’d like to learn more about our AirwayCentric® approach, pick up a copy of GASP!: Airway Health – The Hidden Path To Wellness by Dr. Michael Gelb and Dr. Howard Hindin. If your child is struggling with difficulty breathing during sleep and hyperactivity in the New York area and you suspect an airway sleep disorder is to blame, fill out our contact form, or call to make an appointment with Dr. Gelb on (212) 752-1662.